The Sorrowful Song of the Mother and Child 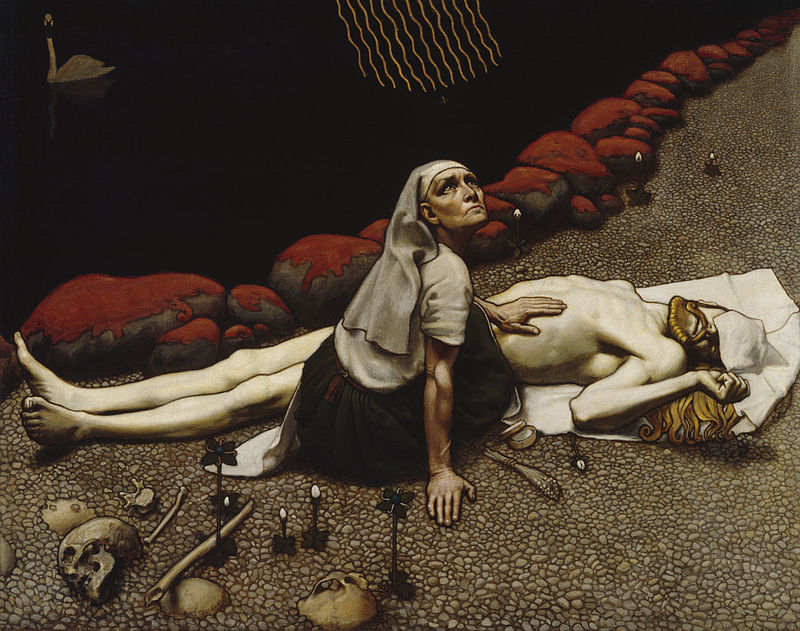 In this third week of Advent we are focusing on the third of the seven last words of Jesus from the cross–“Woman behold your son . . . behold your mother.” I’ve reposted this piece that I wrote in 2012, when considering the death of my mother in a larger backdrop of mothers and sons, and of Mary and Jesus.  Blessings, Pastor Ken

One of the most moving, haunting pieces of music I have every encountered is Harmon Gorecki’s 3rd Symphony: Three Sorrowful Songs.  It is one of the songs that I routinely listen to while reading and preparing sermons.  I’m very particular about what music I can listen to while I study—it must be non-invasive to my thinking, and yet provide a gentle screen to keep out the street-noise that is almost a constant in my downtown neighborhood.  The three movements are equally poignant and passionate explorations of maternal relationship, as Gorecki himself said, “…the ties between mother and child.”

The first movement describes Mary’s anguish at the death of Jesus.

The second movement has a particularly fascinating origin.  Its words were found etched onto a wall of a Gestapo jail in Poland.  An eighteen year-old girl wrote:  “O Mamo nie płacz nie—Niebios Przeczysta Królowo Ty zawsze wspieraj mnie (“Oh Mamma do not cry—Immaculate Queen of Heaven support me always”).  Gorecki himself visited the jail, read the inscribed plea, and was understandably moved. Surrounded by etchings in the plaster calling for justice, revenge, and divine intervention—written presumably by adult prisoners, the composer noted the girl “…does not despair, does not cry, and does not scream for revenge. She does not think about herself; whether she deserves her fate or not. Instead, she only thinks about her mother: because it is her mother who will experience true despair. This inscription was something extraordinary. And it really fascinated me” he later explained in an interview.

The third movement describes the heartache of a mother searching for her son, who has been killed in battle.   Its roots are found in a folktale from the Silesian Wars between Poland and Austria in the 1700’s.  All of the movements are somber, complex—and, to me, comforting.

I think we all have some background music in our souls.  These songs and pieces are like lodgers that show up asking for a place to stay for the night, but soon make it very clear that they should really move in for good.  Gorecki’s Three Sorrowful Songs symphony moved in to my soul—but didn’t stand out from the other music there until winter of 2011.

It was the season of Advent. I was preparing my sermons for the coming weeks—and especially wanted to focus on Mary and Joseph, the earthly parents of the Holy Child. I had researched Gorecki’s piece enough to know that it spoke of the theme of mothers and their children, and in one movement spoke of Mary and Jesus.  It formed a low-level soundtrack to my preparation of the sermons, playing for hours as I sat at my desk working.  Often, as the biblical text and the music intertwined, I found myself sitting at my desk in tears evoked simply by the pathos of the piece as it seemed to pour over and meld with the gentle, soon to become tragic story of the young virgin bearing a child, and hearing that the events of the child’s life would one day comprise a sword that would pierce her own soul.  These tears were the first of many that would flow in the coming months, for another movement, this one in my life, began at that time.
“Your sister called.  The hospital just called and told your Mom they want her to come in—now—for an MRI.”

“Right away?” I asked. “Without an appointment?”

I drove immediately to the hospital, where my folks sat in the waiting area of the Magnetic Imaging Department.  They were nervous, not so much because of the need for an MRI.  Such a diagnostic tool is likely used on everyone with suspected gallbladder troubles, which is what had brought my mother to her doctor’s office just a few days earlier.  It was the “Come in this morning” part that they found troubling; for once a person reaches their seventies the assumed certainties of health and wellness begin to show small cracks and chips.  Appointments are made for MRI’s—not sudden phone-calls, “Come in this morning”!

At the time, they didn’t know what would be found, but in the ensuing weeks it would be confirmed that my mother had pancreatic cancer.

As the dust settled, and the future began to form into a much different shape than any of our family would have imagined, I found myself sitting at my desk, continuing to work on Advent messages, particularly those with emphases on the Holy Family, with Gorecki’s symphony gently, quietly playing in the background—and would simply, suddenly, begin to weep.  Mary and Jesus.  Mothers and sons.  An 18-year old daughter in a Gestapo jail.  “O Mamo.”

“This morning, come in.”

So, the haunting, intertwining accounts of mothers and sons, and mothers and daughters suffering the loss of each other melds into one ache seated in the deepest, rarely disturbed chambers of my soul.  And despite the kindnesses of others, and the hope of faith—the faint, barely discernible echoes of loss and separation keep tapping at my soul like moths rustling against a lampshade after the light has been turned off.

When Jesus hung on a cross, His body in the final death throes of crucifixion—He looked at His own mother, Mary.  His sunken eyes then fell upon a friend, John.

“Woman, behold your son.”  And to John “Behold, your mother.”  Christian tradition tells of the apostle then taking Mary into his own family, and caring for her until her death.  To the end, mothers and their sons, mothers and their daughters.